In the world of tuner cars, it is fairly rare to roll up on the scene, in any make or model, and not come across someone who is up for debate. A hot one that is always heavily divided in the boost vs N/A debate. You have your boost junkies, that thrive off of any kind of forced induction, just waiting for 3 grand on the speedometer to be put in their seats. On the other hand, you have your "all motor" class who advocate for snap of the throttle power and engines revving high enough to dislocate wrist pins. Is it truly possible to establish common ground? Does torque and consitant poer throughout the rpms compensate for the insane numbers of a monster turbo or supercharger?
I think the answer comes down to it depends what you want, when you want it. I tend to have a soft spot for Honda's, and may or may not be partially biased for really well built all motor cars. Utilizing a comparison between a K20 turbo and an all motor build with the K24, we can see what happens when you replace induction for displacement. For this comparison, I have researched and found the typical "middle of the road" build for both a k20 turbo and a k24/k20 all motor. 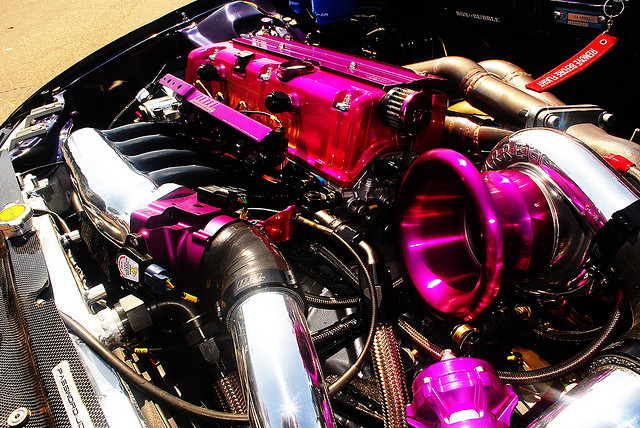 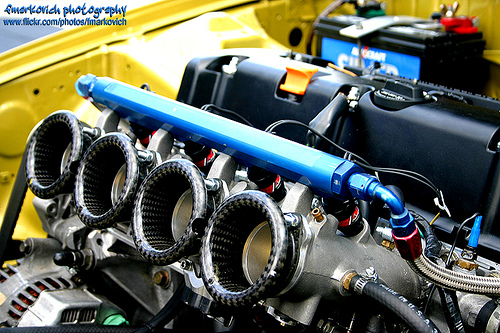 I should mention that the reality of this comparison is that its pretty much intangible. It shouldnt exist. Its like the apples to oranges expression but without the vitamin C. That being said, we will continue to compare the two for arguments sake. When researching these two different beasts, you will find alot, and I mean aLOT of B.S to simply put it. You are not going to get 300hp on a stock k24/k20, it just wont happen. Its like Bill Clinton's affair, didn't (did) happen. But, if you know enough about cars and whats going on under the hood, you will find some truth in your research, enough to make a nice round number estimate on what each build can provide. In this case, I am saying the k20 turbo, with a bought turbo kit and mild tune (I dispise the use of "Stage" to describe a tune or modification, but thats another article) will yeild the owner between 280 and 300whp, and lower 200 and below ft/lbs of torque. The allmotor k24/k20 with a mild build (moderate cam, bolt on's, and tuned as well) will generally yield its owner a solid mid 200's for hp (240 - 260) and around 200 ft/lbs or torque. In the same car, we can assume power to weight ratio will be higher in the all motor application. However, the caveat to the k20's numbers is when they are produced. With the 6 speed transmission and the naturally fast revving engine, the k24/k20 is going to begin making its power the moment you grab the reins. The turbo, however, will need to be spooled up to make efficient power. Turbo's are a science in themselves so for this scenario, we are assuming something that will peak it efficiency at a max of around 16psi. If it were running 10 - 12 psi in this example, we would assume that its not performing well in first gear (letts face it, first gear in any newer si lasts long enough to realize you're about to grind second). This shorter gear, however, will be beneficial to the all motor from the dig because with lower gear ratios in the transmission and a decent final drive, the torque out-put will happen more efficiently. However, as the gears climb, so doesnt the turbos efficiency in maintaining its spool, and building peak boost quicker and for a little longer...       So where do we stand. As stated before, it all depends what you want from your car. All motor may be better for auto-cross or maybe even a gutted drag car (check out team 1320's record breaker here) Yet, the boosted car can perform equally as well in the same scenarios. The build simply needs to appeal to the scenario so if your sitting in a burger kind parking lot arguing about a light to light and who won and making excuses about your "wheel hop" or your "boost leak", then carry on because you've already discriminatingly picked your side.